Capturing the Story: “With CES help I can do it” 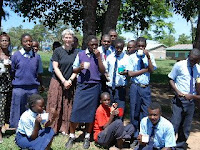 At the next school, I met an remarkably bright and articulate young man that CES is sponsoring. The Director of studies proudly shared that he is the “Head Boy” of the school. The Head Boy has additional responsibilities of helping organize the lessons, the other students and the class rooms which requires early morning attendance at the school. This bright 18 year old boy was in Form 4 and stated he wanted to be a lawyer or a judge. “I want to make it to Canada, with CES help I can do it” he exclaimed. During the interview he told me that he was from a family of four and when his father died his sister had to drop out of school. “I would have had to too if CES didn’t help me.” He remembers his mother confining in him how bad it would be for his sister to drop out of school because the risk of poverty was worse for girls. Miraculously, though, she managed to complete her school work but now remains at home because of debt to the school and friends. 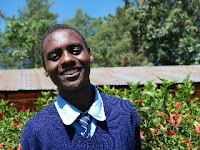 The Head boy shared with me his dreams, “I want to stay focused because my dream is to come to Canada. I know I will go to University because of your (CES) help. I don’t want to roam around in Kakamega after my Form 4.” With such conviction, focused hard work and determination, I have no doubt that he will succeed in whatever path he chooses. After our talk he introduced me to the other students and we began using with the camera I brought and the one I gave to him for the photography project. The other students were playful and at the same time, very respectful of their guest. 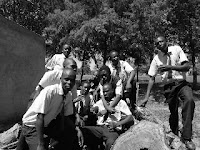 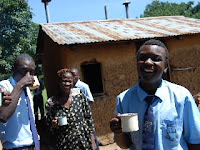 Posted by Tania Zulkoskey at 2:21 PM