Capturing the Story: Managing with what you have 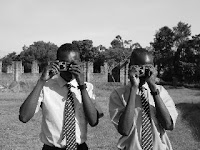 Have you ever gone to school on your day off? Did you ever attend meetings of your day off? Imagine at the ages of 15 and 16 you willingly and egarly agreed to do just that! I am not sure what impressed me the most, was it that these students walked 5-10 kilometers to meet me at school on their day off or was it their ability to keep going in the face of adversity. The first young man who introduced himself to me shared that he wanted to be specializes in operations. He realizes that in order to have a better life in the future, he would need need to stay in school and work hard. Although it isn’t asa doctor that simple as that. He and the other CES student explained that sometimes the lack of resources gets in the way of going to school. They share this example: “Maybe you are half way up (awake in the morning) and you have half your uniform on and you need a pen or a book but you don’t have it. That is discouraging.” “You don’t have the books and it’s hard.” 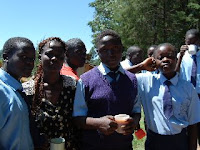 The next young man shares that he would like to become a psychiatrist. His interest in this profession comes from the idea that “it promotes community; I would be serving people more than serving myself.” He said that “it helps to have motivation; I have the urge to come to school.” One of the students had used a camera once before, but never had a full roll of film to shoot. They looked at the questions posed to them and agreed to be a part of the photography project. 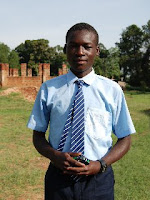 The photography project asks specific questions that involves having the students capture their ideas on film. The questions require reflection and the idea is to promote insight into their lives. They include topics on school, health, friends and family. 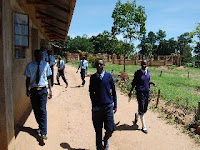 Posted by Tania Zulkoskey at 2:22 PM